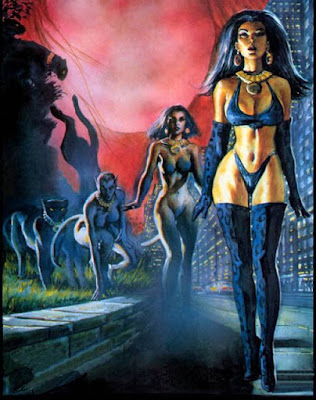 Powers:
Cursed Werecat:
Pantha is believed to be an elemental being, tied to the Egyptian goddess Bast. Pantha’s history is tragic: A former high priestess of Ra who was cursed with eternal life after a rampage that left many dead, including her son. Curesed with immortality and amnesia, Pantha wanders the Earth, unable to find rest or a home.

Pantha has the following powers:

-Longevity: Pantha does not seem to age, and may actually be immortal
-Heightened Senses: Pantha has In (40) Heightened Senses.
-Tracking: Pantha can track with Rm (30) ability, following hard to discern trails and the like.
-Shapeshifting: Panther: Pantha can change into a large female panther, which provides the following stats:
F: 30 A: 40 S: 30 E: 40
-Natural Weaponry: Pantha can manifest either her fangs and/or claws in human form. Pantha can inflict 30 points of damage, halving body armor resistance.
-Regeneration*: Pantha has Rm (30) regeneration. In addition, Pantha has shown greater ability to recovery from toxins and disease.
-True Sight: Either due to her mystical heritage or her adventures, Pantha can discern the true nature about beings.

Limitations:
Cursed by Ra: Cursed with immortal life, Pantha cannot die, nor can she recall the details of her life. Pantha is cursed to wander the Earth in punishment for her crimes.

Enraged: Pantha can become enraged when seriously wounded or innocents are harmed. When this occurs, Pantha must make a Psyche feat or shift into her alternate form, going beserk in the process.
Posted by Nemo at Monday, August 24, 2009