First appearing in 1992’s CandyMan, the vengeful spirit with the hook hand wasn’t just an interesting figure – In many ways he was unique. Candyman wasn’t just the normal slasher – It was a matter of being believed in that sustained him, and the need to maintain the horror and power of that belief which continued to drive him.

I rather appreciated the concept and liked the first movie. I wasn’t a big fan of the other two, but the first one was very cool and for me, it was the first character since The Tall Man that had awesome lines. 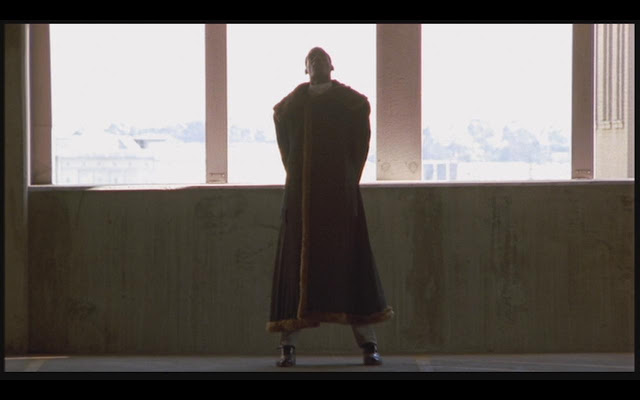 Talents:
The Candyman has the following noted talents:

Powers:
Ghostly Spirit:
The Candyman is the earth-bound spirit of a murdered man whose entire purpose is to perpetuate his own existence through his legend. The Candyman has several unique powers which derive from his undead state, although only a fraction have been revealed. These powers include:


Contacts:
The Candyman has no contacts.

Limitations:
The Candyman has several limitations to his unique state, including:


Notes:
This was not an easy write-up. I placed The Candyman’s Strength and Endurance as high as I did due to the fact of his actions from the movies, clearly he was superhuman in both and seemed unfazed by his condition or other elements. Secondly, Immunities are not ranked, as I’ve done with other undead, I think that simply the dead are immune to some things. Third, the hook – I consider it a mystical aspect of the Candyman, but I thought it should be treated as weapon as it was used against him.

Also, it should be noted, that Tony Todd is amazing!
Posted by Nemo at Thursday, October 13, 2016 No comments:


” There was another thought when she was so very close to me, a strange working of memory. I thought of a particular lion hunt many years ago. Moving through the tall grass, getting a glimpse at the prey, the shoulders mostly, the mane. You prepare your rifle. You're very quiet. And then there's a moment. The wind changes, the grass stops swaying. The lion turns, looks at you. The moment you realize you're no longer the hunter, you are the prey.

I won’t like about my love of Penny Dreadful
, it was probably my favorite show of the last decade and although John Logan claimed it was meant to end after three years, I did not necessarily agree with that. I could do an entire month on just characters as represented, and several may appear during this month (at least two more), but I thought that rather begin with the obvious choice I would instead begin with Sir Malcolm Murray.

The Father of Mina Murray and one of England’s greatest explorers, Malcolm Murray is relentless, single-minded, deeply flawed, and incredibly dangerous. It is Murray’s sheer will that often makes him formidable….and monstrous.  If you haven’t checked out Penny Dreadful
I cannot recommend it enough. 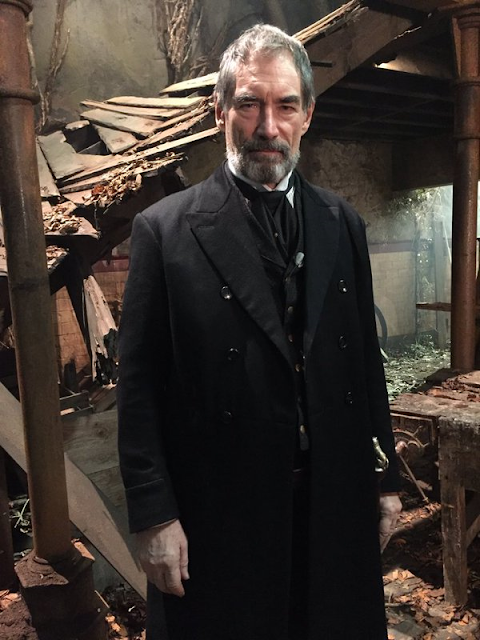 Powers:
While Sir Malcolm is a normal man, he has displayed several key abilities which are power-like. These include:

Iron Will:
Although not the traditional power of Iron Will, Malcolm has shown to be able to take tremendous amounts of harm both physical and mental and continue going. Malcolm’s will allow him to remain conscious, focused, and even allows him opportunity to shake off magical charms and mind control when the situation presents itself with an opportunity (usually, Malcolm must know he is under such a charm). When Malcolm takes damage and/or requires an Endurance or Psyche FEAT to remain conscious or focused and fails, he may then make another check on Rm (30) intensity. Malcolm’s will is significant enough that he was able to thwart a major thrall of Dracula’s, shake off ultimately a long-time enchantment placed upon him by Madame Kali/Evelyn Poole, and ignore the personal and private costs his actions have had.

Well-Connected:
Sir Malcolm is well-known in English society and well-connected. Malcolm is able to draw upon his status and wealth to find contacts when necessary in a variety of different fields and locations (such as first encountering Dr. Frankenstein, Knowing Abraham Van Helsing, or even knowing when to look for an expert like Ferdinand Lyle). Sir Malcolm’s connections are in a variety of different walks of life and he can refer to his connections at any time, Judge’s discretion.

Always Armed:
For the most part, Sir Malcolm is always armed with pistols, knives, and a concealed sword cane. When Malcolm expects trouble he will add to his arsenal ranging from rifles to innovative weaponry (like the automatic prototype of the Mauser pistol). As such, Malcolm is considered prepared most of the time for whatever threat is present.

Wealth:
Through both a family fortune and his activities as an explorer, Malcolm is extraordinarily wealthy. While his Resources are set at Rm (30), Sir Malcolm lives in a different era where his equivalent fortune would be around In (40) in modern times. Malcolm maintains a manor in the country as well as the city home in London, as well as being able to mostly finance his expeditions himself.  Malcolm is well-positioned with his wealth to be able to make most the more difficult Resource FEATS with a simple green, always having readily available resources when necessary.

Contacts:
Sir Malcolm has many, many contacts throughout the world. Sir Malcolm’s closest contacts are usually those he deals with regularly – Ethan Chandler, Dr. Victor Frankenstein, Ms. Vanessa Ives, and Sembene.

Limitations:
Sir Malcolm is a man with many limitations, based around his own nature, actions, and activities. Malcolm’s limitations include:

Dark Secret: Sir Malcolm carried on a decades long affair with his neighbor’s wife, and may or may not be the father of Vanessa Ives.

Dark Secret: Sir Malcolm abandoned his son in order to gain glory for himself, a fact he reveals very privately and was used successfully as part of the goals of Evelyn Poole.

[Obsessed: Sir Malcolm’s driven nature makes him obsessed to the point of foolishness at times, such taking chances in the search for his daughter. Malcolm can become narrow-minded in his goals, which has hindered him often.

Loyalty to Vanessa Ives: Although initially more out of a need to find his daughter Mina, Malcolm becomes very protective of Vanessa to the point of risking his immortal soul to help her.

Violent: Sir Malcolm is a dangerously violent man when provoked, which takes some effort. When provoked Malcolm suffers a -1cs to Psyche FEATs, mirroring his obsessive qualities.

Guilt: Malcolm feels a great deal of guilt for his actions (especially losing his son and daughter), and feels a deep sense of private remorse for his activities. When encountering those who can use his guilt, Malcolm suffers a -2cs to his Psyche (again, like Evelyn Poole did).

Notes:
Sir Malcolm’s FASERIP is something I toyed with for a while. Clearly Malcolm’s natural abilities are far above those in the society around him, and his Endurance is significant, not slowing or dropping in his later years. I set Malcolm’s Fighting and Agility as I did based on the descriptions in the Penny Dreadful Companion
as he is equally adept in combat with melee or ranged weaponry. Secondly, I placed Malcolm’ Intuition as high as I did based on his ability to hunt and stalk successfully vampires, witches, and other related creatures. I was tempted to set Sir Malcolm’s Psyche higher, but I felt that it was high enough to represent where he was at between Season 2 and 3. I think that Malcolm’s willpower and tenacity increase, but only if he directly is aware of such things, which makes Evelyn Poole so dangerous. Finally, I think the power-like effects are the best representations of how easily Sir Malcolm functions within his world. Malcolm develops a better sense of the occult as the show progresses, and as such I felt that to include a basic level of occult lore would be necessary and appropriate.
Posted by Nemo at Thursday, October 13, 2016 No comments:

Father Merrin from 'The Exorcist'


” The demon is a liar. He will lie to confuse us. But he will also mix lies with the truth to attack us. The attack is psychological, Damien, and powerful. So don't listen to him. Remember that - do not listen.”

I’ve not ventured very far into the supernatural yet, sticking closer to the heroic figures of horror. There are a number of them, and some terrible things are on the horizon, but before we get there I thought I’d include one more horror hero.

Father Merrin represented the noble and heroic figure who is mentor, confessor, sinner, and most importantly, exorcist. Merrin is a figure who has grappled with the forces of darkness in his past, seeing many things and yet devoted to the fight against evil and darkness. There is something tragically noble about Father Merrin, and at the same time very human. It’s Merrin’s faith that makes him strong, but it is his faith, which he questions at times, which makes him truly powerful. 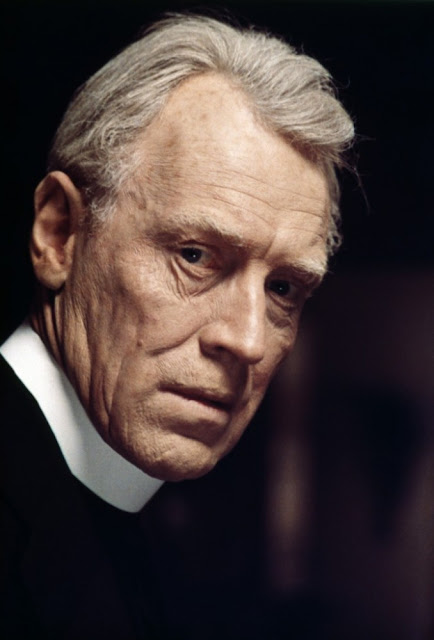 Powers:
True Faith:
Father Merrin is a man of the cloth and truly believes in his faith. Although there are moments in which Merrin may question the nature of his faith, he does not doubt it. Merrin’s faith grants him several abilities against the supernatural, including the ability to perform a true exorcism. Merrin can perceive the nature of creatures with a FEAT, although Merrin’s ability to perceive it is not instant. Merrin cannot be swayed, controlled, or manipulated by infernal creatures.

Contacts:
Merrin has many contacts throughout many different walks of life. Merrin was well connected within antiquities community, as well as being a controversial member of the Catholic church.

Weak Heart: Merrin had a weak heart that plagued him towards the end of his life, reducing his effective Endurance rank and rendering him dependent on heart medication. As such, whenever Merrin is under physical or emotional stress of Gd (10) or higher, Merrin must make an Endurance FEAT. Failure results in Merrin beginning the Dying process.

Enemy: Pazuzu: Merrin made a powerful enemy in the demon Pazuzu while in his younger days, making a life-long enemy.

Age: When encountered in his final encounter with Pazuzu, Merrin is in his elder days.

Reputation: Father Merrin has a reputation within the church, and is treated with occasional controversy.

Notes:
I placed Merrin’s Psyche at In (40) due to several reasons, chief among them was that it was his body which failed and not his spirit….and he was holding his own against Pazuzu. I felt Merrin’s Psyche and Faith were intertwined, and more importantly, were greater than a normal man’s willpower. I initially thought this was too high, but I figured it was probably more in line on how Merrin was presented in the books and how he was presented in the movie.  I felt his faith abilities were more implied but formidable enough. Merrin’s knowledge was his other strong suite, he was well-versed and I debated other talents to include.
Posted by Nemo at Thursday, October 13, 2016 1 comment: