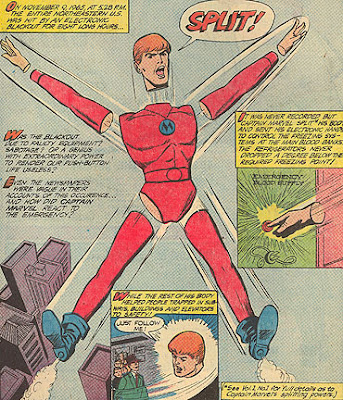 Limitations:
Power Source: Captain Marvel is powered by an amulet comprised of Element X. If removed, Captain Marvel will operate for 1-10 rounds before shutting down and entering a hibernation state until the Amulet is restored.

Glass: If Captain Marvel's head is covered or blocked by glass, he loses control of his seperated parts.

Command Word: For Captain Marvel to seperate, he must say 'Split', and to reform he must say 'Xam'
Posted by Nemo at Friday, August 28, 2009